Although Barbie’s Tokyo 2020 Olympic Games collection touted inclusivity, it completely missed the mark for its lack of Asian representation. Consumers took to social media to express their disappointment in Mattel’s decision to feature an American Barbie in a Japanese karate uniform and excluding an Asian doll. The fact that this year’s Olympics were held in Tokyo, and that Sunisa Lee became the first Hmong-American to compete for Team USA, only adds fuel to the fire that Mattel created. 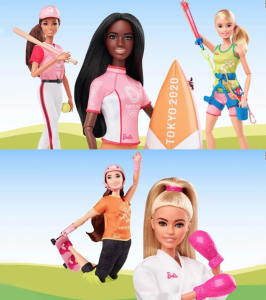 While Mattel maintains its skateboarding doll was intended to represent the Asian community, a spokesperson told the Huffington Post that the company acknowledges that it “fell short.”

“Fostering a more inclusive world is at the heart of our brand and we strive to reflect that in our Barbie product line. With our Barbie Olympic Games Tokyo 2020 dolls, we celebrate a range of athletes to inspire kids to find their athlete within,” said the spokesperson. “However, our intention to represent the Asian community with the Skateboarder doll fell short and we fully receive and recognize the feedback. Moving forward, we will work to find more ways to champion all representation and celebrate the amazing achievements of all Olympic athletes, who are showing us that anything is possible.”

Will Mattel be able to overcome this PR nightmare? I think so. Barbie has been popular for more than 60 years and has successfully released other inclusive toys such as a doll with vitiligo, another with a prosthetic limb, and even gender-neutral dolls. A few weeks prior to the Tokyo Olympics opening ceremony, Barbie had also released a doll modeled after Japanese tennis player Naomi Osaka as part of its Role Model series.

Yet, in the age of cancel culture, only time will tell if consumers will continue to support the Barbie brand.