Just ahead of the 2018 season, the New York Jets created a lot of hype by announcing that they would unveil a new uniform. By midseason, fans were expectedly excited for the reveal after it appeared like another “less than stellar” season was unfolding.

For the past decade, the Jets have been extremely disappointing. However, with players working to change the culture like Jamal Adams, a young franchise quarterback in Sam Darnold, and big free agent acquisitions in Le’Veon Bell, C.J. Mosley, and more, the Jets fanbase has a ton of reasons to be legitimately excited.

On April 4th, the New York Jets introduced their new uniform and logo at the Gotham Hall in midtown Manhattan. The rebrand includes three uniforms the team will be wearing this year: Gotham Green, Spotlight White, and Stealth Black. 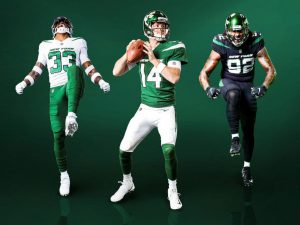 Let’s take a closer look at the full-scale rebrand.

The home, away, and alternate uniforms include a shade of green, known as “Gotham Green” that was exclusively created for the Jets. The alternate jersey features an all-black base. The jersey’s previous font has been updated to a new typeface. Also, for the first time in the team’s history, the city is included on the uniform.

There have been slight modifications to the logo as well. The newer logo has more of a resemblance to a football with its oval shape. The color scheme is still white and green, however, the green that is used in the logo is also the new “Gotham Green.” The initials “NY” are no longer featured, instead, New York is spelled out and at the forefront of the logo. Lastly, the football graphic seems to be slightly overlapping the letters in the logo instead of being placed at the bottom like it used to be.

The new Jets jerseys and logo have received positive praise from fans and the players alike. The jerseys serve as more than just a rebrand – they symbolize a chance to start over. With a new coach and a number of free agency splashes, it will be interesting to see if these changes will propel the Jets to be one of the better younger teams in the league. Or, will they be the “same old Jets” with a new uniform?

Mike Benedetto
Mike is responsible for PR and social media at Springboard. When he is not in the office, he is listening to music, catching up on basketball, or finding the next best spot to eat.
Previous Post Email Marketing 101: Everything You Need to Know to Get Started Next Post Game of Thrones Gaffe Stirs Up Social Media Frenzy
Menu